March 06, 2018
The beautiful Dalmatian is the only truly spotted dog breed, with it spots forming in black on white or liver on white patterns.  This ancient breed is depicted in Egyptian Pharaohs tombs as well as in Dominican monasteries, as far back as 1360. A versatile breed, they function well as sporting dogs, border sentinels, draft dogs, circus performers and coach dogs, but perhaps they are best known as the firehouse dog.

Interestingly, the Dalmatian is born completely white, and only gradually begins to display his markings.  Here we see three week old puppies beginning to show their most predominant spots.  By eight weeks of age, we will have a better idea of the extent of their coat pattern. 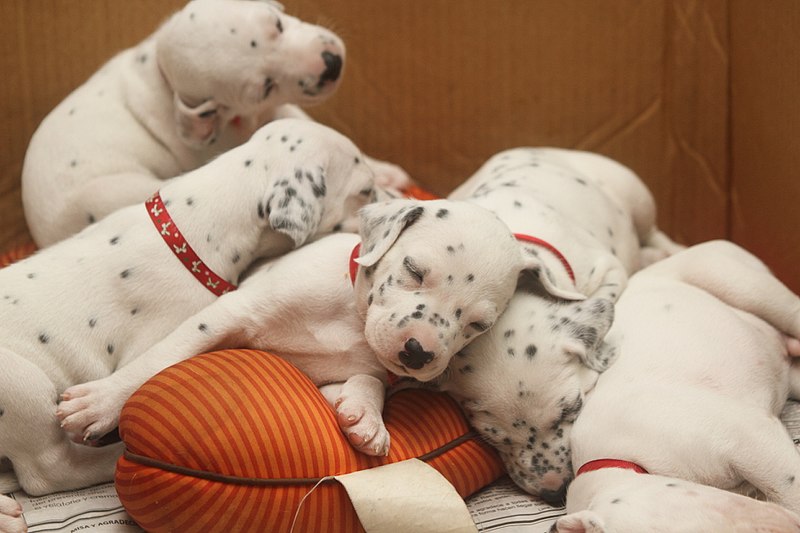 These names for male dalmatian puppies celebrate the spotted coat of the only truly spotted dog.

Brand - To mark with a symbol or ensignia.

Checkers- Black and white gamboard with black and white round playing pieces.  Jumping over your opponent's tile earns you their piece.

Domino- White tile with black spots used in a variety of games.

Scatter- To distribute are irregular intervals.

Seurat- Post-Impressionist painter, George Seurat, devised the art of Pointillism, wherein a composition was composed of tiny spots or points that from a distance formed a realistic composition. One of his most famous works, The Circus, is composed of circus scenes.

Streak- To mark with spots or slashes.

Weston- Influential black and white photographer, edward Weston, was known for his images of landscape, nudes and still photography.

A Pois- French for spotted.

Bingo - Lottery game where players cover the numbers on their cards as they are called out. The winner is the first to complete a straight line vertical, horizontal or diagonal.

Emma- Both Emma Watson and Emma Stone are proud to sport their freckles unmasked.

Pepper- Black and white spice, and the name of Angie Dickinson character in Police Woman.

Splash- To dash liquid about, mark or spot that is the result of tossed liquid.

Tana- Children's author, Tana Hoban, created a series of wordless books for parents to read to infants called Black on White.  These bold images encourage reading skills in infants too young to differentiate words and letters as symbols.


While the breed did not originate in Croatia, the Dalmatian takes his name from this region.  In fact, the Croatians have employed these dogs as border sentinels for hundreds of years.  Here are names inspired from Croatia.

Danube- The Blue Danube is a river that runs through Croatia, inspiring Strauss's waltz of the same name.

Dubrovnik- White city of Croatia, all of the building and streets are made of white stone.

Krist- Krist Novoselic, bass player for Nirvana, born of Croatian parents and spent some time in school in Zadar in his youth.

Kupa- This river forms a natural border between Croatia and Slovenia.

Pula- Ancient city of Croatia with many ancient Roman buildings, including the Pula Arena.

Tesla- Nikola Tesla was born in Serbia, now part of Croatia. Tesla devised the alternating current method of deliver of electricity to the USA. 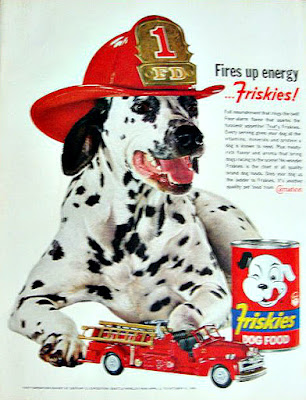 Dalmations worked with the early horse drawn fire engines to help clear they way as the engine raced to the fire. Then they helped to calm and distract the horses, who understandably were afraid of the billowing flames.  Additionally, the dogs helped protect the fireman's equipment while the fireman were otherwise occupied.

Today, dalmations are frequently the firehouse mascot, although they stay back at the station when the alarms are sounded. These names are inspired by Fireman terminology and slang.

Banker - "Bank Down" is a term for what smokes does as it fills a room. The smoke creates layers of different temperatures, with the coolest and least smoke region being at the bottom near the floor.

Burner - Any apparatus where fuel is burned.

Char or Charro - To burn or blacken by fire. Charro, 1970's celebrity and classical guitar player.

Cinder - Ashes, the residue of combustion.

Ember - The smoldering remains of a fire.

Flare - To blaze with a sudden burst of flame, a superior sense of style.

Flash - A sudden burst of light; flashover, the simultaneous ignition of combustible materials.

Flicker or Flicka - To burn unsteadily.

Flow - Fireflow, the amount of water running through the hoses.

Helmut - Common German given name derived from the word "helmet," meaning to protect.

Jet - To be shot forth in a stream.

Kindle - To warm or encourage a fire.

Maltese - The Maltese Cross is the emblem of firefighters.

Pilot -  Member of a Mutual Aid department (nearby by fire department with an existing agreement to assist each other without need of special authorization) who rides with the mutual aid engine to ensure proper direct.

Probie - A new firefighter or one who is on probation.

Pyre - A heap of wood for a fire, often associated with Indian funeral pyres.

Pyro - Pyro Maniac, one who loves to set fires or is fascinated by watching fires.

Sear - To burn with extreme heat.

Shimmer - To fluctuate or appear to vibrate while reflecting heat waves.

Shine - To give out light or glow.

Siren - Warning device at Firedepartments and on fire engines for vehicles to clear the roads. Also, Greek mythological creatures that lured sailors to their deaths with their song.

Smokey -  Smokey the Bear, "Only you can prevent forest fires."

Stretch - Command to layout firehose and connect it with the nozzle.

Tanker or Tender - Wheeled vehicles carry large amounts of water to the scene.

Zone -  Buffer or safety zone. Name your dalmation Zone and you can call him or her Zoney.