If you are lucky enough to have acquired a GSD puppy or adult dog, no doubt you are seeking a majestic German Shepherd Dog name.  After all, German shepherd puppies are the second most popular breed in the United States, and deservedly so. Highly intelligent and fiercely loyal, these noble dogs are loving family pets and unparalleled protectors.
As a breed, they excel at herding, agility, as well as obedience, not to mention they make excellent schutzhund (a German word meaning "dog for protection") guardian dogs. Police departments, drug enforcement agencies, and military services the world over rely on the versatility and biddability of the German shepherd to protect facilities and sniff out bombs as well as contraband.
These puppy names have been chosen from German history to celebrate this breed's heritage as kings of the herding group, and as the ultimate guard dog and family friend.
These naming ideas you will find here are separated into the following categories:

These German military terms and notable commanders, make particularly powerful names for German Shepard Dogs.  Many of them are familiar to us from history books and old World War II films.  Consider names such as blitz/blitzkrieg which have dual meanings as in "lightning" and "total war."

Blitz - The German word for lightning. Blitzkrieg means "lightning war" and was a method of attack using a vast assault of mechanized weaponry with shifting fronts to keep the enemy off balance and unable to effectively respond.

Panzer - The German word for armor. The Panzer tanks were the backbone of the German blitzkrieg of World War II.

Ada - The diminutive of Adala, which means "noble" in German.

Aneken - The diminutive of Anna, it means "favored with grace."

Elsa - Short for Elizabeth or Elsabeth, Elsa means "God is my oath." It is the name of the famous tame lioness of Born Free.

Heidi - Like the heroine of the novel by Johanna Spyri, Heidi means "sweet" and "noble."

Marlene - Has the peculiar double meaning of both "child of light" and "bitter."

Rikki - Means "powerful ruler" and is the title of a great Steely Dan song, "Rikki Don't Lose That Number."

Romey - Although it means "rose," it also means "obstinate" and "rebellious." 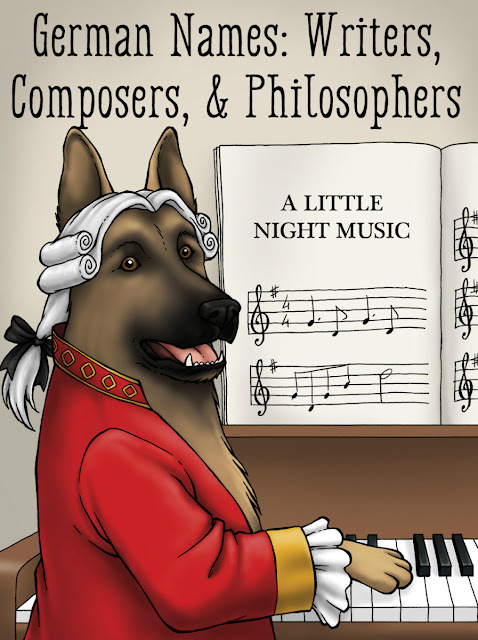 Amadeus - A child prodigy of the Classical era in Austria, Wolfgang Amadeus Mozart began composing at the age of five. During his short lifetime, he composed over 600 works. His operas and symphonies are perhaps the finest in musical history. Among his most recognized works are The Marriage of Figaro, Don Giovanni, Requiem, and The Magic Flute. While Mozart achieved acclaim during his lifetime, financial security remained elusive. At his death, which remains somewhat mysterious (118 different causes have been posited), he was buried in a common grave. Following his death, interest in and enthusiasm for his work grew substantially.

Bach - Johann Sebastian Bach was a composer of the Baroque period. During his lifetime, he was regarded as an accomplished organist. However, his compositions were under-appreciated. It was not until a later revival that his works were reevaluated and Bach came to be regarded as one of the greatest composers of all time.

Beethoven - Ludwig van Beethoven was a German composer who developed in the shadow of Mozart's artistic legacy. He is famous for his nine symphonies, numerous sonatas (including the Moonlight Sonata), piano concertos, and string quartets. He was one of the greatest composers in musical history, but in a cruel twist of fate, Beethoven began losing his hearing at the age of 26. By the time he composed and conducted his Ninth Symphony to ecstatic applause, he was profoundly deaf. Name your German shepherd puppy Beethoven if you want a dog with an invincible spirit.

Brahms - Johannes Brahms was a composer during the Romantic period; he is commonly best remembered for his lullaby.

Danzi - Franz Danzi was a composer, conductor and first rate cellist of Italian extraction. He was a contemporary of Beethoven.

Felix - Felix Mendelssohn was a composer of the early Romantic period. He is considered one of the greatest composers of sacred music.

Kafka - Franz Kafka was born in the German-speaking portion of Prague, then the capitol of the Kingdom of Bohemia and part of the Austro-Hungarian Empire. Considered one of the most influential writers of the 20th century, Kafka was virtually unknown during his short lifetime. Among his most influential works are The Metamorphosis, The Trial, Amerika, and The Castle. Feelings of isolation, mystical transformations, and parent-child conflict are the overriding themes of his novels and short stories.

Pachelbel - Johann Pachelbel is best remembered for his Cannon in D, used in many marriage ceremonies. Name your dog Pachelbel and you can call him Paco for short.

Deiter - Means "army of the people." It is also a Mike Myers character, the host of "Sprockets" on Saturday Night Live.

Errol or Erroll - Comes from the German word for earl, which is a high-ranking nobleman.

Lewis - From multiple cultures; its Germanic meaning is "famous fighter or warrior." In French, it evolved from the word "wolf"; Welsh, Gaelic, Jewish, and Arab names have also been Anglicized into the name Lewis.

Ludwig - "Famous warrior" and is the first name of Beethoven and Wittgenstein.

Volker - "The people's warrior or guard."

Wolfgang - Wolfgang refers to an approaching or advancing wolf.

Zelig - Also the name of a Woody Allen film, Zelig means "blessed one."