How Dogs Learn The Meaning Of Words 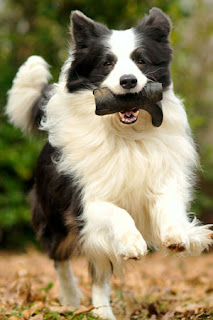 The average dog can learn as many as 150 words, a fairly substantial vocabulary beyond sit, stay and come. Research with several border collies has brought those vocabulary numbers up beyond 400 words, and a border collie named Chaser has learned the names of 1022 objects, which he can differentiate and fetch on command.  There appears to be no upper limit in Chaser's vocabulary lessons, as he continues to add words to his lexicon.

In the wake of such impressive results, researchers Emile van der Zee, Helen Zulch and Daniel Mills sought to determine the presence of a key feature of human word comprehension in canine learning. In the research article, Word Generalization by a Dog (Canis familiaris): Is Shape Important?, the researchers sought to determine if shape bias existed in dogs as it does in humans.

Experiments with human 2 year olds, have shown a "shape bias" exists in the learning of new words.  Simply put, once the child associates a name with an object, it then generalizes the shape of that object to other objects with the same shape.  For example, a child taught the word ball, when presented with a group of new objects, will seek other spherical shapes regardless of their size and texture.  Children associate ball with round; do dogs learn the same way?


Using a 5 year old border collie named Gable, the researchers used random words, such as DAX or GNARK to create a word association with an object.  Once the word-object association was made, researchers began to replace the familiar object with new object choices.  When presented with new objects to retrieve, Gable sought objects that were similar in size to the original object, without regard to the shape of the object.  As Gable became more familiar with the word-object mapping, he replaced the size preference with an association of similar texture of the object. As Gable better understood the word-object relationship, he relied on how the object felt in his mouth to determine the best choice for retrieval.

I am reminded of a scene in the film, Best In Show, when the toy, Busy Bee, goes missing.  The pet shop owner offers up a toy similar in size and shape to the panicked dog owner.  She rejects the new toy as it is obviously not a bee, but is instead a fish.  The pet shop owner tries to convince her to purchase the toy stating, "I think the dog is responding to the shape and strips on the toy."  Yes and no. The dog would respond to the similar size and plush material, but not the stripes or shape of the toy.

As a practical application of the research, those of you needing to replace a treasured toy should seek toys of similar size, texture and firmness.  Ultimately, the dog is responding to how the toy feels in his mouth.

How this research applies to dog training is an interesting question.  Vision is the primary sense of humans.  Therefore it makes sense that we would rely on object shape in determining associations.  Scent is the primary sense of dogs, hearing is secondary and sight tertiary; scent and sound were not presented as  differentiating factors for Gable.

In real world dog training, scent and sound are both factors in our dog's learning.  The smell and sound of treats and objects are likely to be confounding factors for our dogs, unnoticed by humans in our sight driven world.  If you find yourself experiencing a brick wall in your training, if your dog seems to be stubbornly missing the point, consider that he may be responding to another aspect of the situation.  He may have made an association that seems correct to him based on scent or sound.  When you seem not to be on the same page, take a broader view of the situation, and perhaps change objects or locations.

December 26, 2016
The premiere canine athlete, the border collie can do it all, and seems to always excel in any given arena. From herding to agility, obedience to rally, to search and rescue the border collie scores top honors as the most biddable and the most intelligent dog breed. Years of selective breeding have developed a breed whose greatest desire is to please his master. The border collie employs logic to anticipate his master's wishes, as well as the collective mindset of his stock. Here are one hundred border collie names from the traditional to the unique, from Irish, Scottish and Welsh lore, that celebrate their heritage as the preeminent sheepdog and canine genius. Cap of Killiebrae working stock with the signature border collie stealthy crouch Traditional Border Collie Names for Males The International Sheepdog Society (ISDS) lists these following names as some of the most frequently occurring in their vast database. The most popular male name, Ben, is listed as having be
Read more

March 06, 2018
Prunella Fitzgerald de Puech Barrayre The beautiful Dalmatian is the only truly spotted dog breed, with it spots forming in black on white or liver on white patterns.  This ancient breed is depicted in Egyptian Pharaohs tombs as well as in Dominican monasteries, as far back as 1360. A versatile breed, they function well as sporting dogs, border sentinels, draft dogs, circus performers and coach dogs, but perhaps they are best known as the firehouse dog. This noble breed may be slightly aloof, but should never exhibit shyness.  Quick to learn and eager to please, they have been the darlings of circuses, often seen riding horses bareback. Warm and loving within the intimate family circle, they make wonderful family companions. Interestingly, the Dalmatian is born completely white, and only gradually begins to display his markings.  Here we see three week old puppies beginning to show their most predominant spots.  By eight weeks of age, we will have a better idea of the extent of
Read more